Carolyn Goyette Celebrated for Dedication to the Arts

Ms. Goyette channels years of expertise into her work as a sculptor and potter

BLUFFTON, SC, February 14, 2022, Carolyn Goyette has been included in Marquis Who’s Who. As in all Marquis Who’s Who biographical volumes, individuals profiled are selected on the basis of current reference value. Factors such as position, noteworthy accomplishments, visibility, and prominence in a field are all taken into account during the selection process.

As a child, Ms. Goyette was fascinated by the arts. Upon completing her undergraduate degree, she earned a master’s degree and a PhD from Wayne State University in 1968 and 1995 respectively. Additionally, she worked under Ferenc Varga, a Hungarian-born sculptor, for nearly seven years. Despite her education, she realized that she didn’t want to just teach the subject, as she saw many artists go into education and give up their artistic side. Instead, she taught humanities, which included all of the arts, including architecture, writing, history and various other artistic avenues.

While teaching, Ms. Goyette continued to foster her love of the arts and has worked as a potter since the late 1990s. She has traveled extensively over the years specifically viewing a great deal of art. These travels were to Europe, Greece, China, Russia, and India. Ms. Goyette’s intent was not to copy, but to appreciate what has been done historically. She went to China to see the Terra Cotta Army and in South Carolina, where she has lived for 23 years, the basket art and culture of the Gullah people has also influenced her.

Outside of her work, she donates to Delta, an animal rescue in California, and also supports Disabled American Veterans and various other veterans’ organizations. Due to her outstanding breadth of knowledge, she was included in the Women’s Caucus for Art in 1970 and earned recognition for her mermaid sculpture in 2008.

Although her career has been filled with highlights, Ms. Goyette is most proud of doing her art for the sake of it, not for the purpose of business. She kept a few pieces and completed some pieces in marble. One piece she particularly enjoyed sculpting, because the marble came from the same quarry where Michelangelo had gotten his stones. In the coming years, Ms. Goyette aims to stay connected with her sculpture and pottery. She still has a few pieces available that she wants to sell, but she also intends to help other artists in a mentorship capacity. 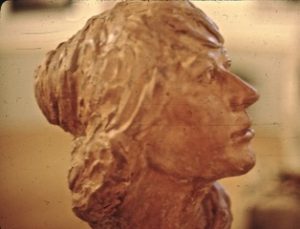