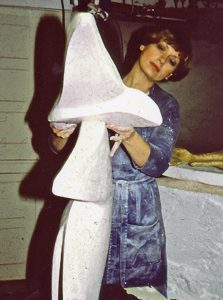 Carolyn M. Goyette recalls she was fascinated by art since her youth, having always known she would spearhead a career in the creative realm. She went on to matriculate at Wayne State University, where she attained a master’s degree in 1968 and a Doctor of Philosophy in 1995. Since the 1970s, Ms. Goyette has prospered as a sculptor and potter, as well as a teacher of the humanities in subjects such as architecture, writing and history for nearly four decades. Additionally, she worked under Ferenc Varga, a Hungarian-born sculptor, for nearly seven years.

Alongside her teaching, Ms. Goyette traveled extensively over the years to view and expand her breadth of art. She traveled to places such as Greece, Russia, India and China, where she saw the Terra Cotta Army. Inspired by cultural works, she recalls she has also been influenced by the basket art and culture of the Gullah people in South Carolina, where she lived for a number of years. Attributing her own success to her persistence, Ms. Goyette’s advice to someone who wants to enter the same type of field is to be true to themselves, and if they want to be committed to their artwork, find alternative ways to make a living.

Outside of her primary work, Ms. Goyette donates to Delta, an animal rescue in California and supports Disabled American Veterans, along with various other veterans’ organizations. Due to her outstanding breadth of knowledge, she was included in the Women’s Caucus for Art in Michigan in 1970 and earned recognition for her mermaid sculpture in 2008. Looking toward the future, Ms. Goyette plans to stay connected with her sculpture and pottery. She still has a few pieces available that she wants to sell, and she is also open to helping other artists, not to teach, but to serve as a mentor.